Dysport is an injectable treatment for wrinkles available by prescription. It’s made from botulinum toxin type A. Although it only received FDA approval to be used as a treatment for wrinkles in 2009, it has been used Europe, South America, and other places worldwide for several years. It was originally developed to treat neuromuscular disorders. Some research suggests Dysport acts faster and lasts longer than Botox. Dysport also spreads much farther from the site of the injection and is able to address broader areas of wrinkles. It should be administered by an experienced physician. 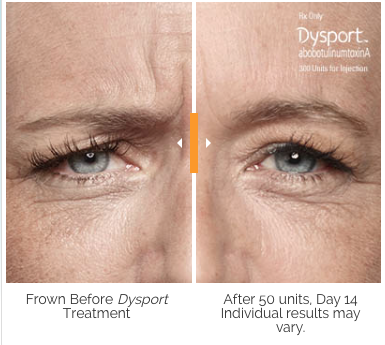 Dysport provides temporary improvement from frown lines between the eyebrows of adults under age 65 who have moderate to severe frown lines. Dysport works by relaxing facial muscles and blocking acetylcholine from being released. The chemical acetylcholine sends signals to the nerves which tell them to contract the muscles. Using Dysport results in smoother, younger looking skin and prevents wrinkles from deepening and new wrinkles from forming for up to 4 months.

It is often used in liquid facelift procedures.

Restylane is an injectable filler which can be used to treat moderate to severe facial folds and wrinkles. It is used to add fullness and volume to the skin. In patients over 21 years of age it can be used to fill lip lines and provide lip enhancement. Restyline is commonly used to fill the lines that develop in the area between the nose and the corners of the mouth. It is made from either natural collagen or Hyaluronic Acid. This injectable filler can be used to erase facial lines, wrinkles, and furrows and leaves the face looking smoother and more youthful. It last for up to 6 months. 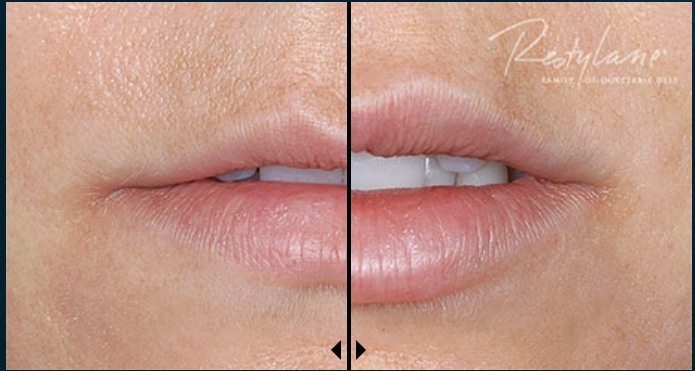 Restylane was the first hyaluronic acid filler to come to market and the first to receive FDA approval in the United States for use in cosmetic injections aimed at the sub-dermal facial tissues. It had been used for a reported 11 million treatments worldwide by 2010. It’s often used to treat crow’s feet, frown lines on the forehead, orbital troughs, age-related facial hollows, to add volume to the cheek, and for contouring of the chin, nose, and forehead. Restylane can increase skin elastic and is sometimes used to revitalize the skin in the décolletage, face, and hands.

Restylane and Dysport are very different. Restylane® is an injectable filler while Dysport is a muscle relaxer. Unlike Dysport, Restylane can be used to make lips look plumper and fuller. The recovery time from Restylane treatments is usually 2 to 3 days and follow-up sessions are generally recommended about every 6 to 12 months.
Dysport was originally developed to treat neuromuscular disorders. It has also been approved by the FDA for the treatment of cervical dystonia and to inhibit sweating. The treatment sessions take about 15 minutes. Patients begin to see results in 2 to 3 days as the muscles begin to relax. The full effect of Dysport treatment takes 7 days and has been known to last as long as 13 months. Dysport contains lactose and albumin.